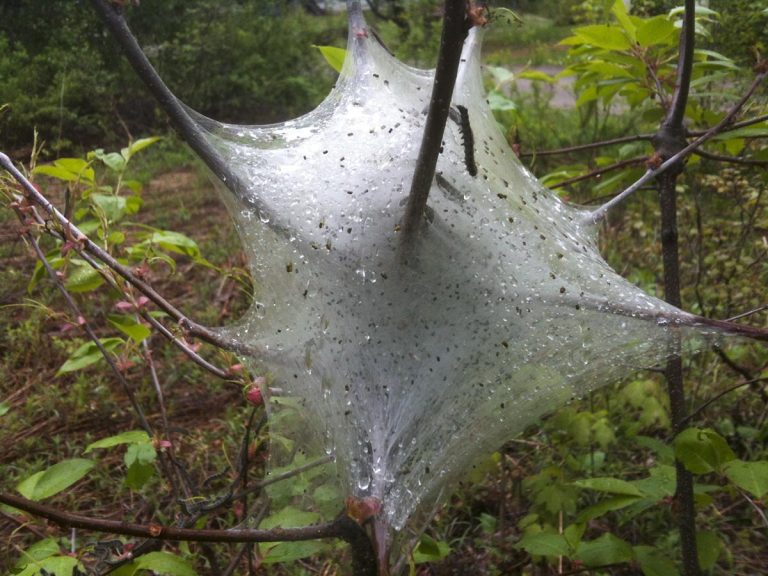 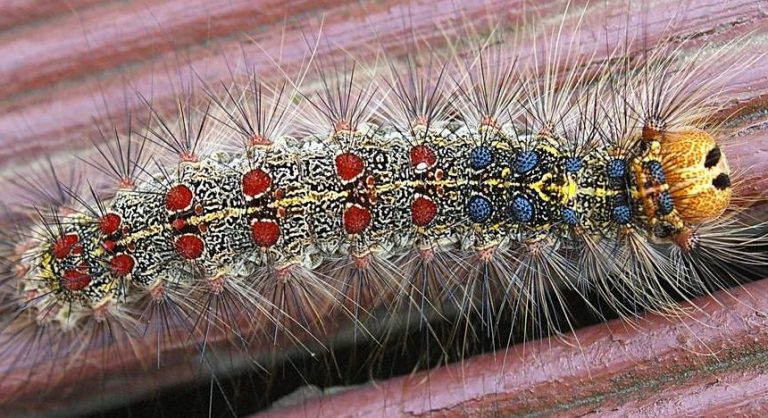 Gypsy Moth caterpillars are now part of the natural environment here in New Hampshire. But once in a while the Gypsy Moth caterpillar population grows to a level that ruins the foliage during the Summer, which in turn also ruins the Fall Foliage season for the annual leaf peepers. New Hampshire depends on the leaf peepers, campers and Summer vacationers that visit from all over the world to help support the state’s economy. But in 1981 the Gypsy Moth Caterpillar outbreak was so intense, there were areas in the state that had no leaves left by August. A walk in the woods provided little to no shade and the peaceful silence was interrupted by the distant sound of these munching leaf eaters. You could actually hear the slight crunching noise of the Gypsy Moth caterpillars eating the leaves on the trees! The Fall Foliage season was a bust that year as was most of the Summer tourist season. Campgrounds that are normally overflowing with campers looked more like ghost towns, beautiful forests and woods were reduced to leafless branches. It was a tourism nightmare.

Landowners have been battling the Gypsy Moth caterpillars for years. During the major outbreak that occurred in 1981, landowners came up with their own home-made solutions. Some of these solutions included doubles sided tape, sticky molasses on tin foil and other sticky traps wrapped around tree trunks. The marks left behind from covering the bark on some of these trees can still be seen in some resident’s front yards in New Hampshire from that gypsy Moth caterpillar outbreak. Other homeowners resorted to removing the branches with the Gypsy Moth caterpillar’s webbed nests by hand and burning them.

Gypsy Moths themselves do not do the damage to the foliage. Females are typically white and the males are a tan color. The female Gypsy Moth lays her eggs soon after mating. The eggs can survive most New Hampshire Winters. Temperatures below -29 degrees Fahrenheit can kill vast amounts of Gypsy Moth eggs.

Need a solution to get rid of Gypsy Moth Caterpillars? Tanglefoot has what you need (below)