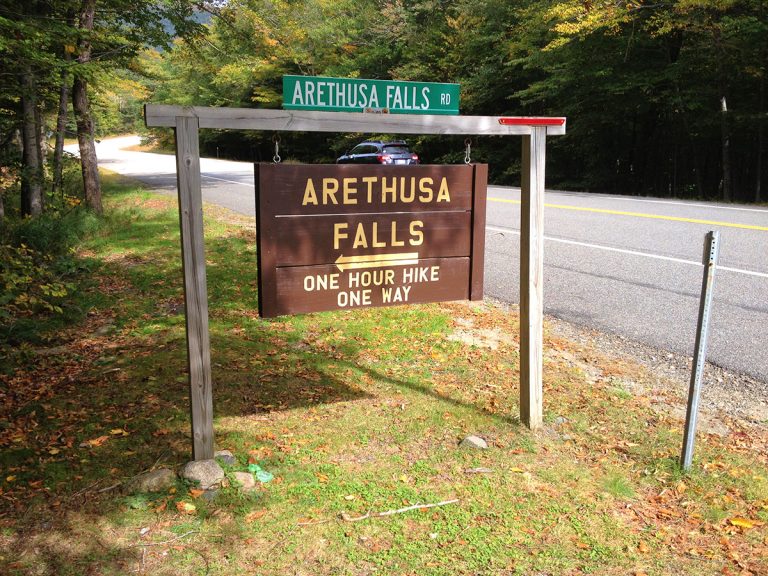 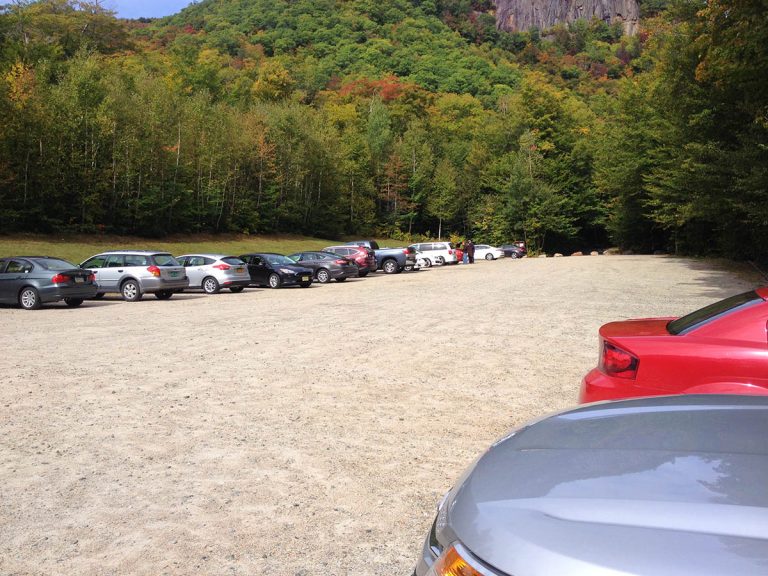 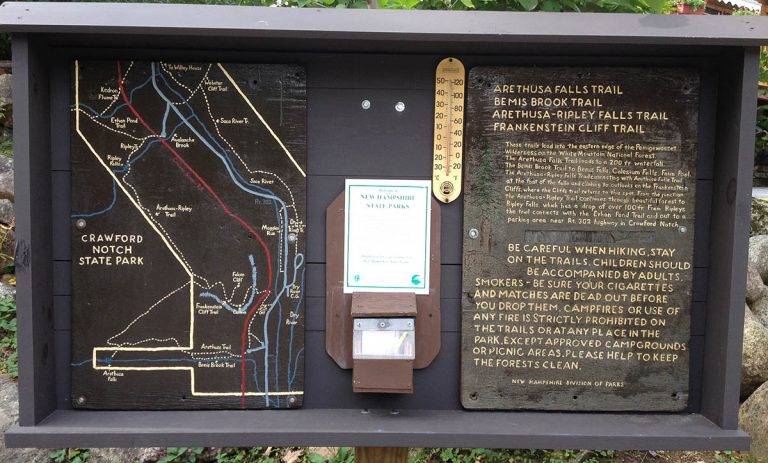 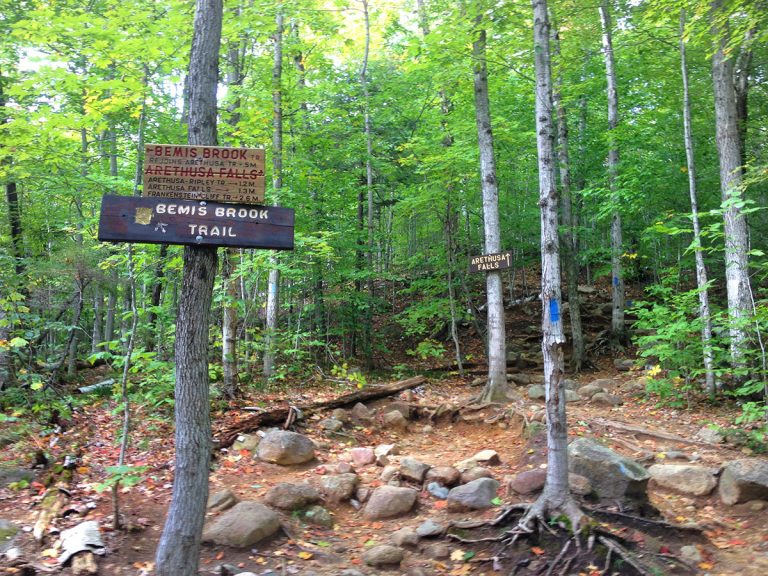 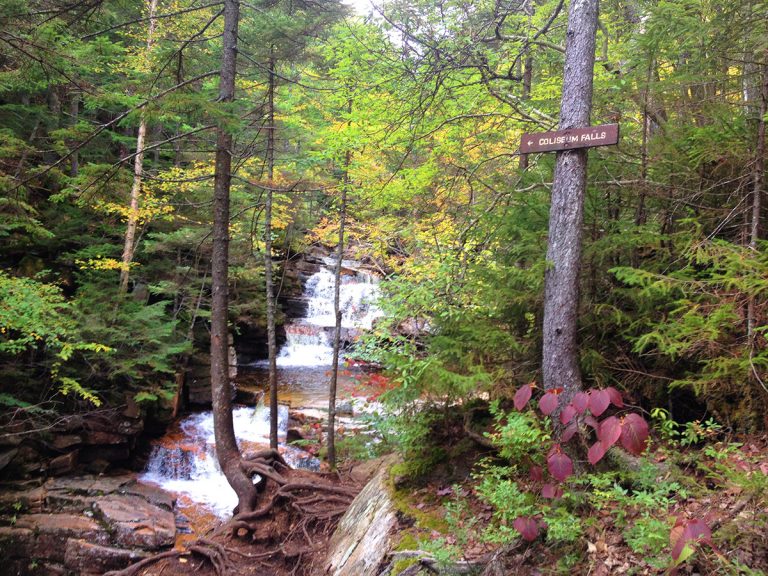 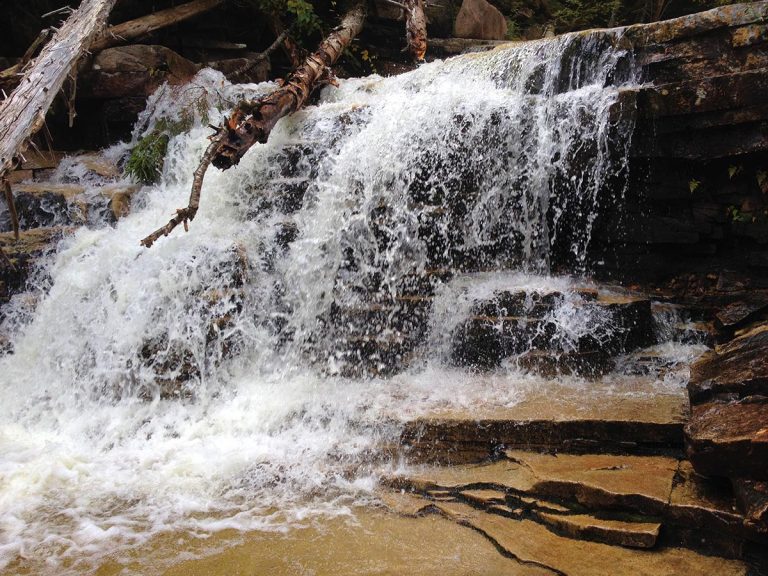 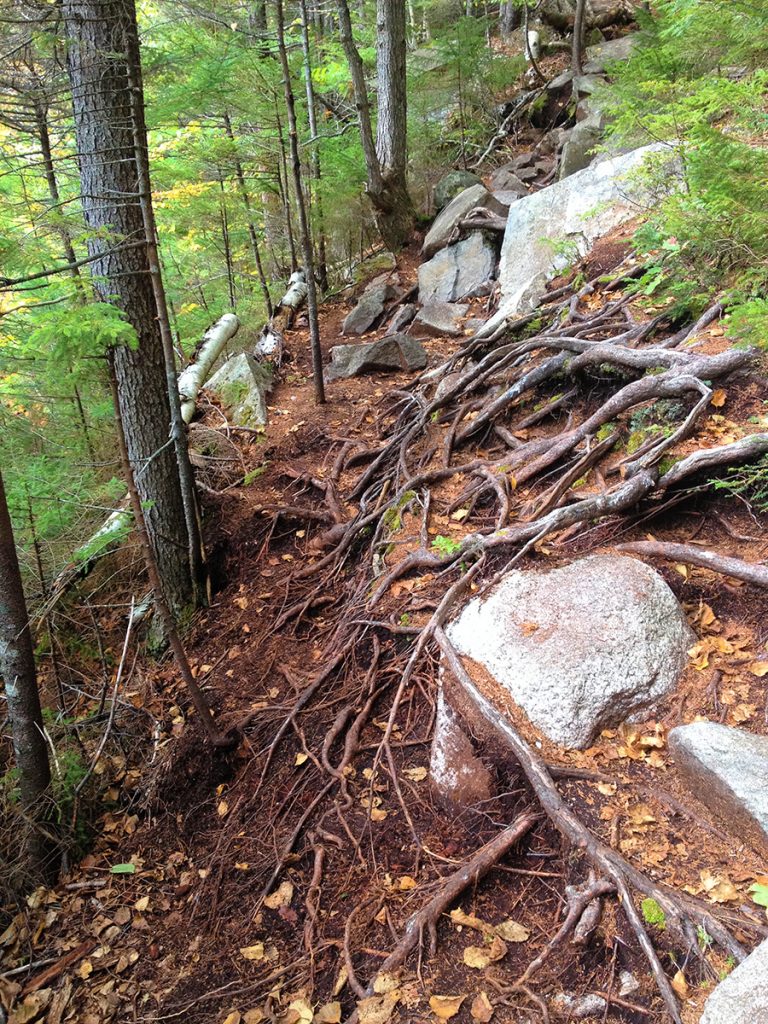 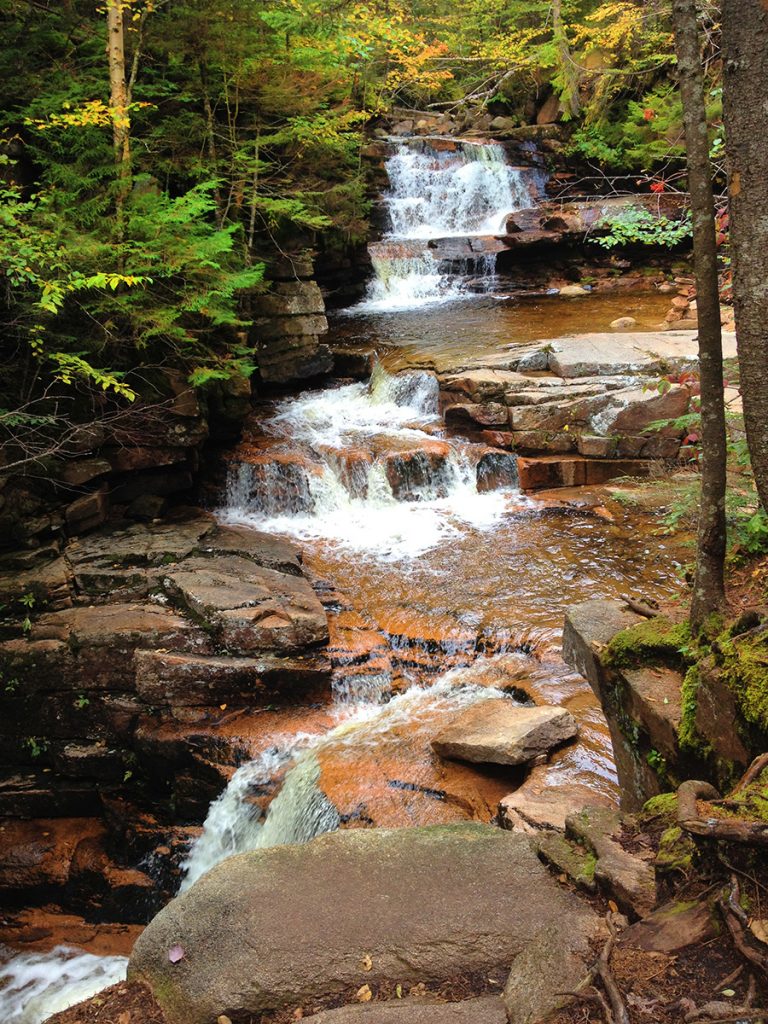 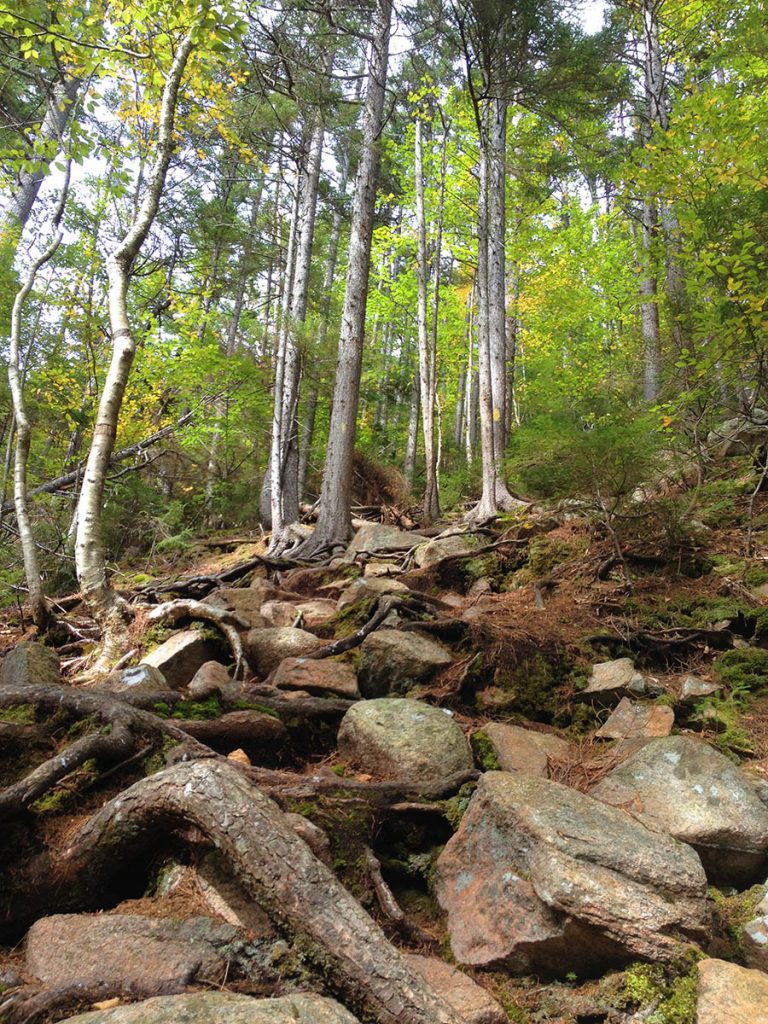 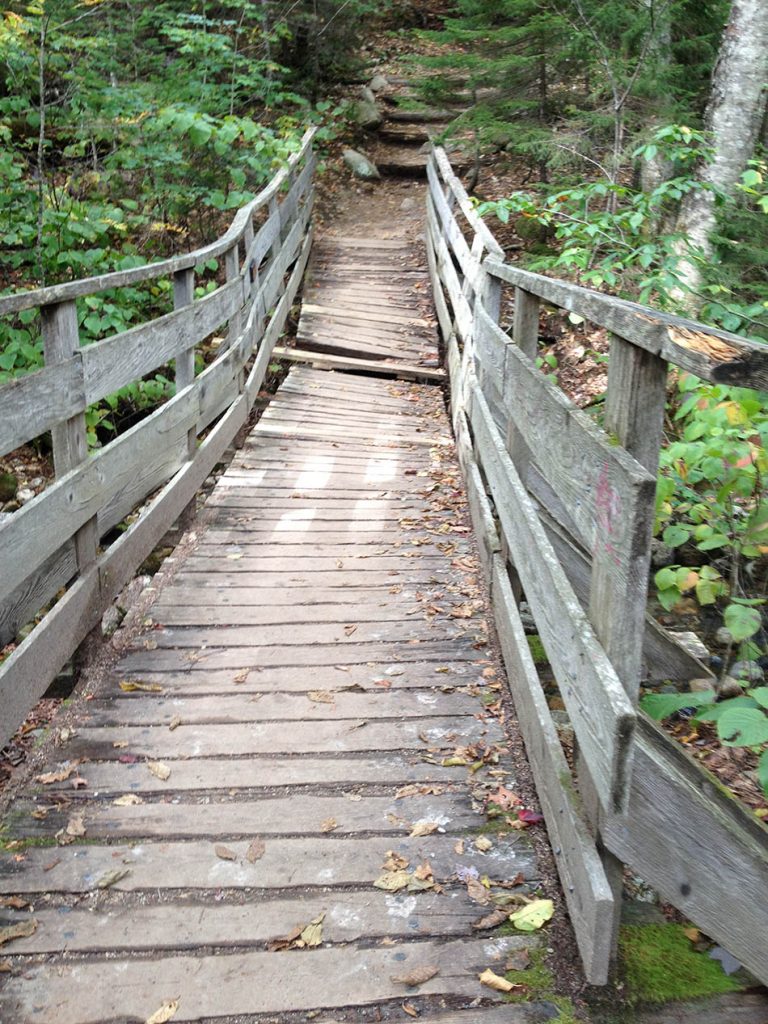 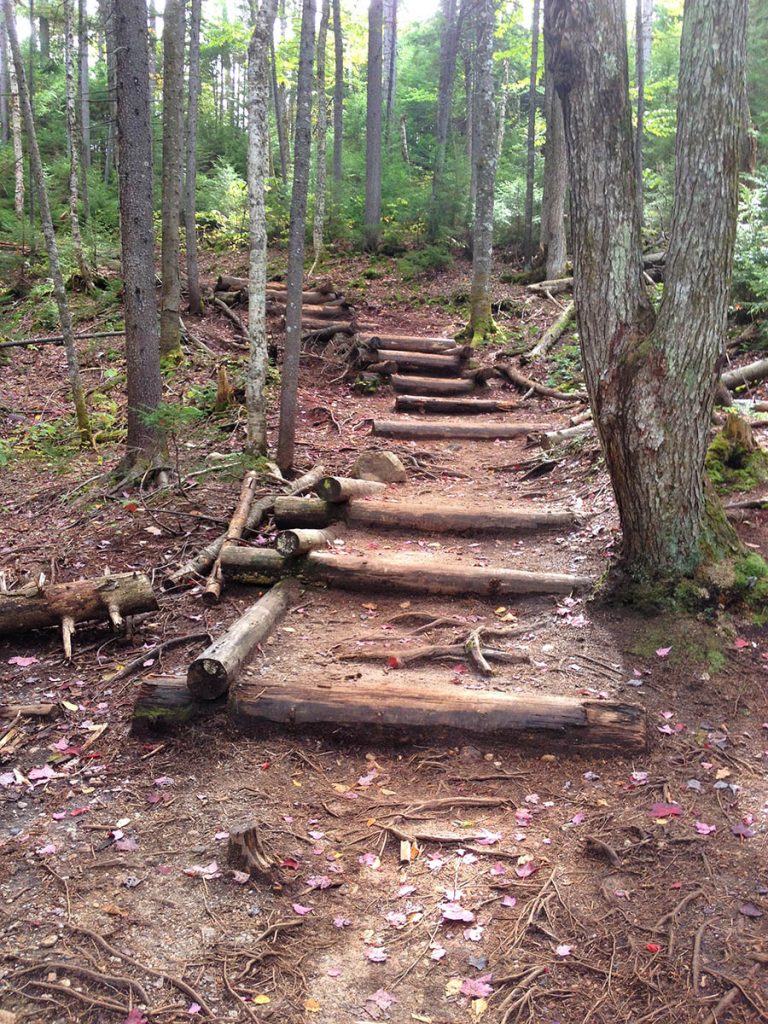 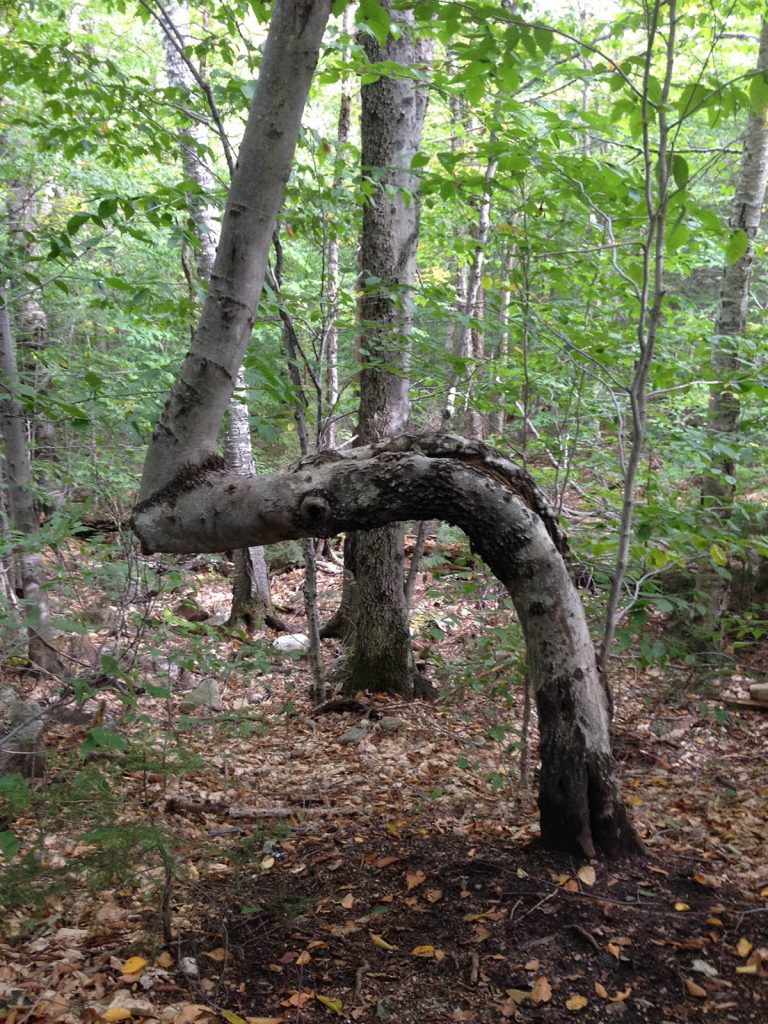 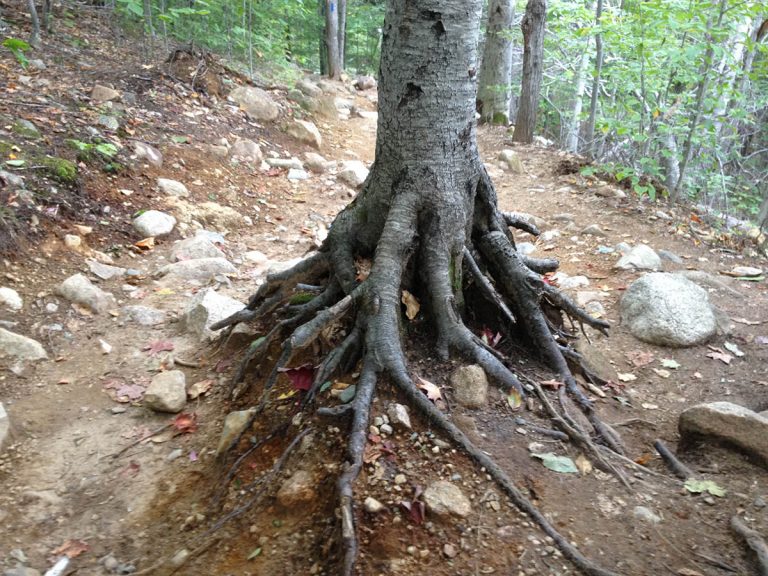 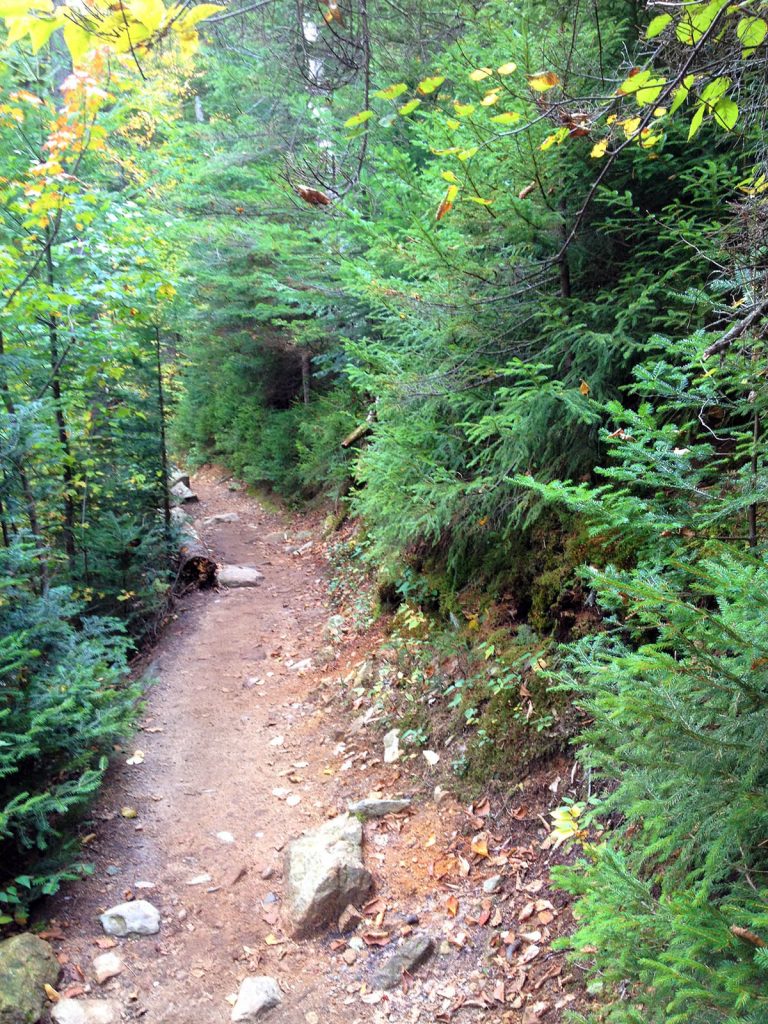 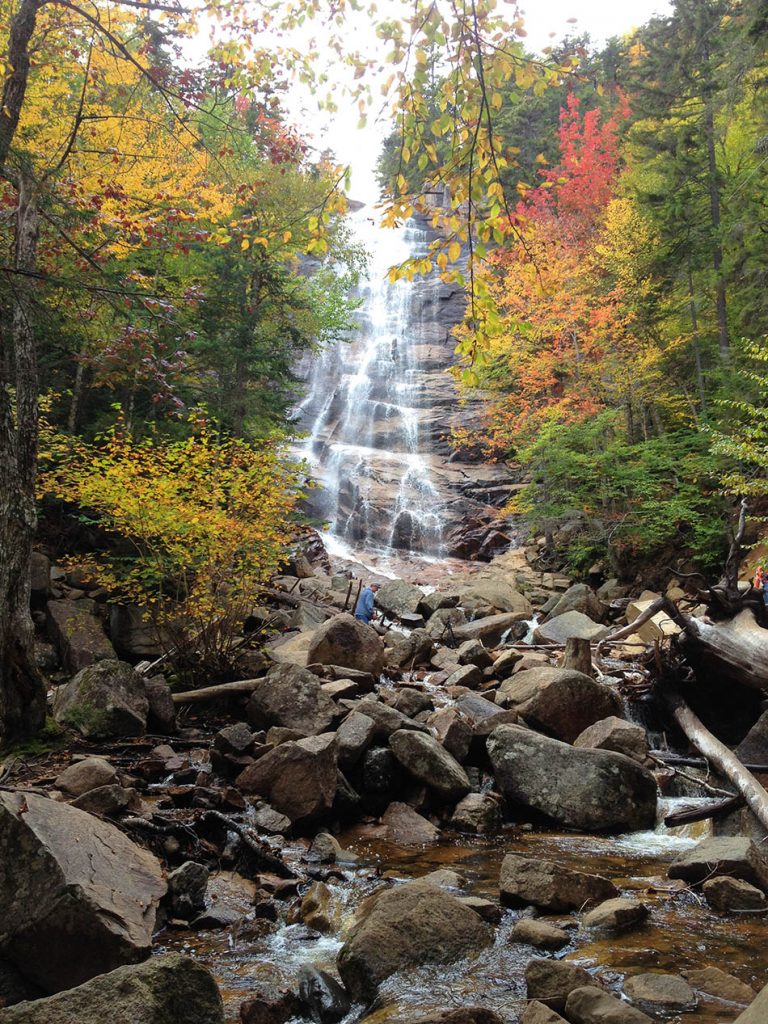 Arethusa Falls is one of the most spectacular waterfalls in New England! The waterfall has the highest free fall drop of all NH waterfalls! If you have not yet been to Arethusa Falls you need to put it at the top of your bucket list!

Rules: No camping, no overnight parking, no bikes, no fires.

The Hike: Take Arethusa Falls Trail…
1.5 miles – 1 hour
Or if you take the Bemis Trail to Bemis Falls, Fawn Pool and Coliseum Falls, then to Arethusa Falls: 2 miles – 2 hours (See “Hiking Info” below)

The hike to Arethusa Falls we found to be a bit of challenge as the 1.5 mile stated distance seemed a bit longer. On our way there we found ourselves asking other hikers on the way back to the trail head how much longer did we have to go. Oddly everyone had completely different answers. One hiker would tell us “30 minutes,” then after we hiked for 30 minutes the next person we asked said “15-20 minutes” longer. On the way back from the waterfall people were asking us the same question. We timed the hike for the purpose of this article so we were able to give fairly accurate times to hikers. When we did they laughed and said they were being told all kinds of different answers so we would recommend to prepare yourself for this phenomenon. Seems that people were really not thinking about the timing of the hike to Arethusa Falls until they were getting tired of walking or maybe it was the Arethusa Falls sign on Rt. 302 that states this is a “One hour hike one way” or its quite possible that you need to take the right trail! Yup, that’s the problem! When we got to the Arethusa Falls trail head we got out and saw a few signs but didn’t pay enough attention to them. As we began the hike to the Falls we were almost immediately faced with a choice of taking the Bemis Brook Trail (marked with yellow paint) or the Arethusa Falls trail (marked with blue paint). We made the decision to take the Bemis Brook Trail because it stated it was only 1/2 mile until it rejoins the Arethusa Falls Trail and we remembered that this trail leads us to see two other waterfalls and a pool.

After a short but challenging hike we were rewarded with some cascades and a couple smaller waterfalls Including Bemis Falls, and Coliseum Falls. We also got to see Fawn Pool.

At Coliseum Falls we realized the trail that ran along the side of Bemis Brook was gone. It took a few minutes to realize the trail was about to re-join the Arethusa Falls trail. But when we saw the 45 degree (plus) climb we weren’t so excited about that. We are not regular hikers and a bit out of shape for such a hike. The roots you see in the photos became handles in some places.

As we went higher we kept thinking we were just about to re-join the Arethusa Falls Trail but were disappointed 3 or 4 times to find we were not there yet.

We rested at the junction for a little while telling other hikers of our adventure up the Bemis Brook Trail. After a few laughs we continued and headed towards Arethusa Falls. We quickly noticed the trails were in better condition than the less traveled Bemis Brook Trail.

This trail definitely had more traffic on it, we met a lot of people from all over, including England and Canada. We even passed a couple that was just about running up this trail. Not exactly our cup of tea but to each their own. The Trail is certainly a trail you need to watch your footing on. Almost the entire way you are walking up and down man-made steps, some are quite a jump and require you to use your hands to hold onto nearby trees but I would call this hike moderate in difficulty for someone who doesn’t hike much, easy for experienced hikers. It is challenging but worth the hike and the effort to see the Falls!

As you get closer to the Falls you will cross a couple bridges that are in somewhat tough shape at the time of this article. You will also hear rushing water if you are hiking here after a recent rainfall. You will also smell the sweet smell of Spruce trees that line the last leg of the hike to the Falls. Soon after you pass the Spruce trees you will catch your first glimpse of Arethusa falls through the trees. And there in front of you is your reward for hiking to this beautiful New Hampshire waterfall! The Fall Foliage makes Arethusa Falls one of the best NH waterfalls to photograph in Autumn.

During the Summer months there isn’t much water here and the Falls can come to a trickle. We chose to hike to Arethusa Falls right after a major rain storm in the Fall and it proved to be the right call!

While hiking Arethusa Falls you can also plan to hike to Ripley Falls, Bemis Falls, Coliseum Falls and Frankenstein Cliff.

October 5, 2010: A 50 year old woman from New Jersey had a heart attack near the trailhead of Arethusa Falls and died.

What Does Arethusa Mean?

Arethusa means “the waterer” In Greek mythology. Arethusa was a nymph and daughter of Nereus who escaped from Arcadia, her home under the sea. When she reached the surface of the sea she appeared as a fresh water fountain on Ortygia Island in Syracuse, Sicily.

The myth of her transformation originated in Arcadia when Arethusa decided to bathe in a crystal clear stream but she was unaware that the stream she bathed in was the river god Alpheus. Alpheus flowed from Arcadia through Elis to the sea. Alpheus had fallen in love with Arethusa but Arethusa left when she discovered the crystal clear waters were Alpheus. A long chase ensued and Arethusa began to pray to her goddess (Artemis) and ask for her protection from Alpheus. Artemis hid her in a cloud to protect her. After such a dramatic attempt to hide Arethusa she was still so afraid of Alpheus that she began to perspire profusely which quickly transformed Arethusa into a stream. Artemis made another attempt to hide Arethusa by breaking the ground allowing Arethusa another attempt to flee as a stream into the ground. Arethusa’s stream traveled under the sea to Ortygia Island. Alpheus was so persistent that he flowed through the sea to reach Arethusa desiring to mingle with her waters.

How do you Pronounce Arethusa Falls?