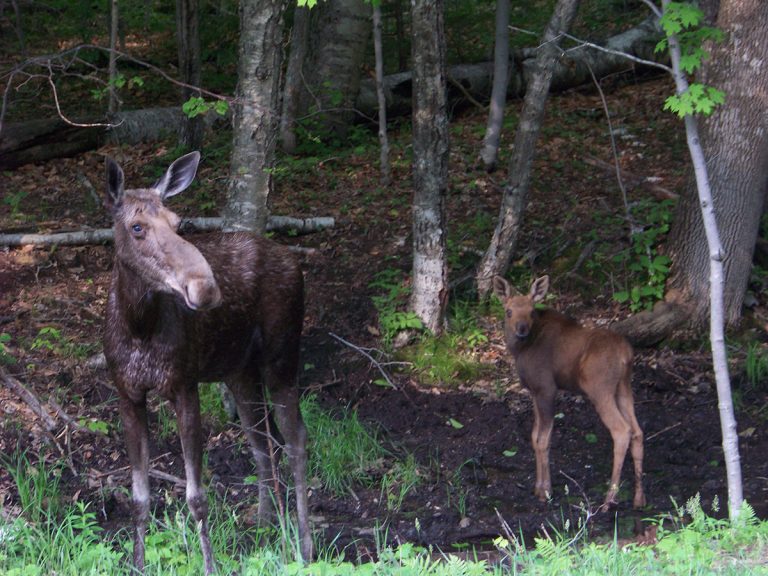 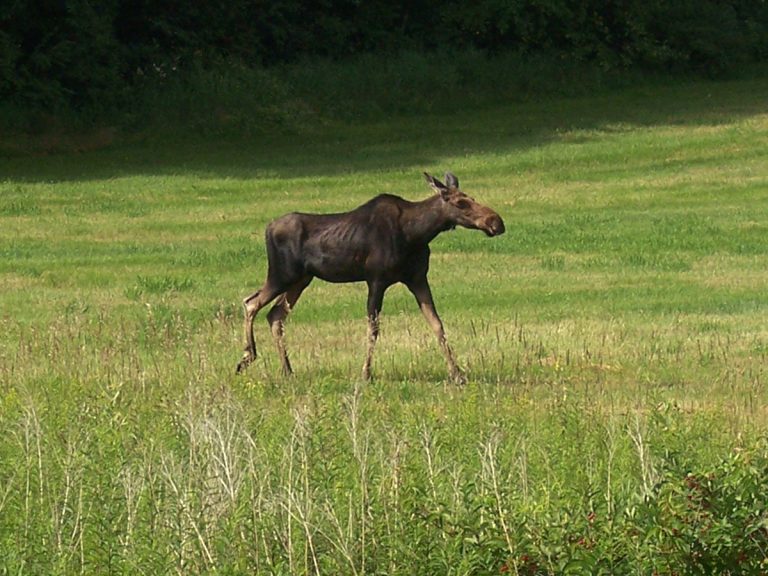 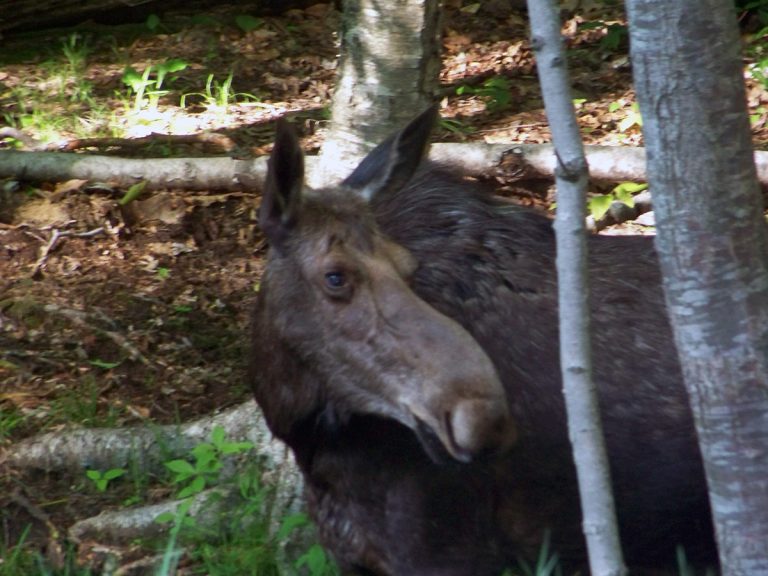 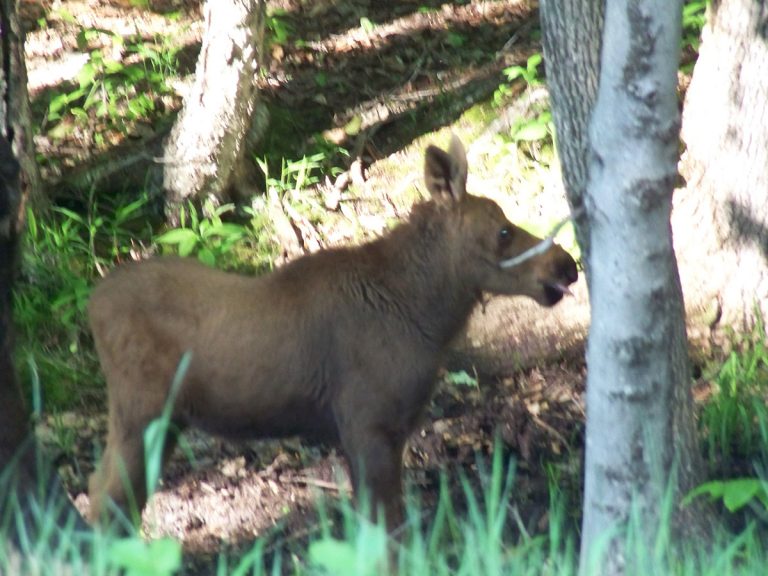 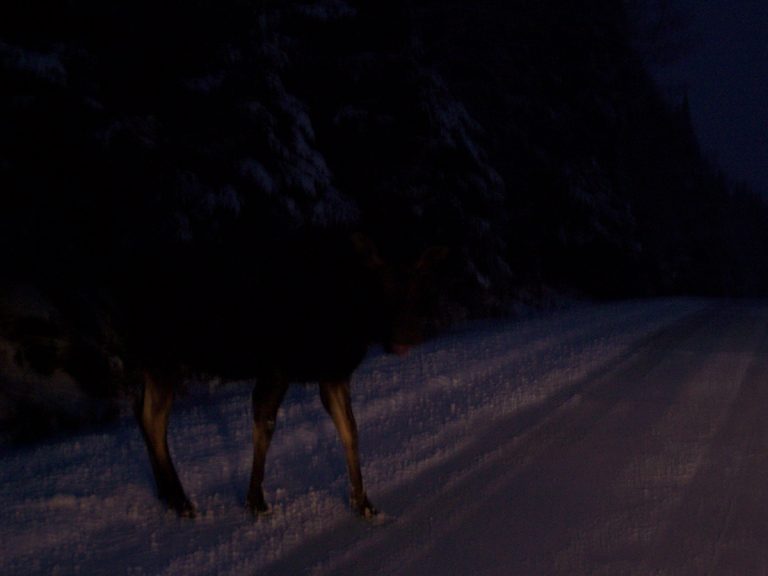 Even close-up Moose are hard to see at night! Notice their eyes do not reflect headlights! 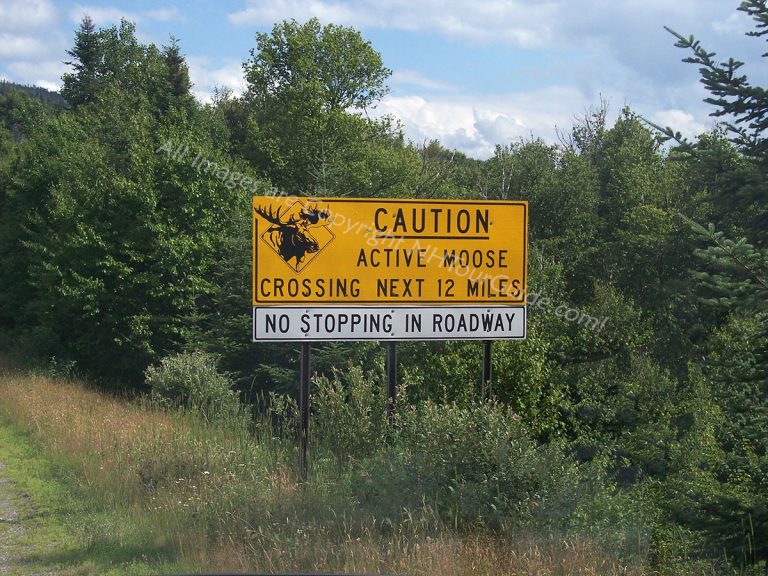 Moose Alley in NH is one of the most desired self-guided trips people make whiel visiting New Hampshire. Because Moose Alley is so far North it is difficult for many people to be there at the perfect time to find moose, which is near sunrise and sunset. If Moose Alley is on your bucket list you may want to rent a cabin in Pittsburg NH or stay in the Great North Woods Region on NH. If you are not planning on staying in the Northern parts of New Hampshire don’t let that stop you from taking a trip to Moose Alley!

Moose Alley offers one of the best chances of finding a Moose in New Hampshire! Moose Alley is a section of Rt. 3 in Pittsburg, NH, north of First Connecticut Lake. You will know when you’re in the area by the bright yellow warning signs (see photo below).

When driving along Moose Alley you will want to be very careful. Moose tend to be on the roadway, all times of the day and night. Once the Moose make their way onto the road, it’s usually hard for them to find their way back into the woods as the woods are so thick in this area that it is almost like a wall of trees. Once a Moose is on the roadway traffic comes to a halt both Northbound and Southbound. Because everyone wants to see the Moose, the line of cars tend to get closer than they should be and the Moose can feel trapped. It can be difficult for Moose to find a path back into the woods as the wooded area of Moose Alley is so thick. Some parts of these woods you can barely get your arm to penetrate the tree line so getting a 1200 pound Moose back into the woods is not always an easy task. Moose become trapped on the roadways, rarely remembering the path that provides their exit, they get confused and from what I’ve seen, tend to run in circles until they find their way back into the woods as shown in the photos from Moose Alley below. Moose are not normally aggressive animals until you trap them or get too close to their young, so avoid cornering the Moose. When a Moose is about to get aggressive you will sometimes notice the hair on the Moose’s back will stand up, much like a cat or dog. Hopefully you’re not close enough to see it!

Moose Alley in NH has been an attraction for many years for people from all over the world. It has also been the target of illegal hunting.

Moose live in many areas of NH, not just Moose Alley. A week after one of our trips to Moose Alley, we spotted a Moose in Chichester, NH (forgot the camera). We also saw a Moose on the side of the road about 50 miles south of Moose Alley. Neighbors said the the moose had been recently hit by a car and had a broken hind leg. While her limping was noticeable, residents said that it appeared she was doing much better. This Moose drew quite a crowd as she ran back and forth in a large field on the side of Route 3 – It appeared as if she was enjoying the attention.

Rt. 3 North towards the Canadian border. The last 12 miles of Rt. 3 in Pittsburg, NH is Moose Alley. Drive carefully!

The best times to see moose along Moose Alley is just before dawn. Around sunset is a good second choice. Sunrise is when Moose are most active. The owner of a cabin in Pittsburg, NH told us that he saw “about 20 moose one morning, at times there were 2 and 3 moose together.”

There are companies in NH that offer moose watching tours. Some even guarantee you’ll see a Moose during the tour.

** Watch for Moose while driving! Moose are very hard to see, especially at night. Their eyes do not reflect headlights, like deer eyes do. Moose are almost black in color. Many times a Moose can be right in front of you and you are unaware.

Even close-up Moose are hard to see at night! Notice their eyes do not reflect headlights!