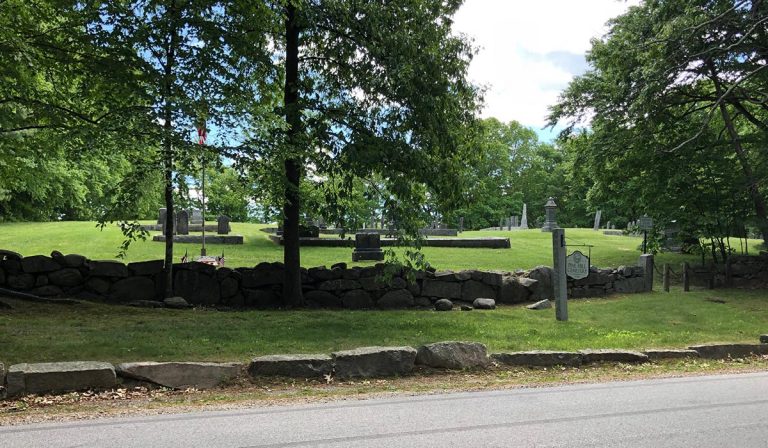 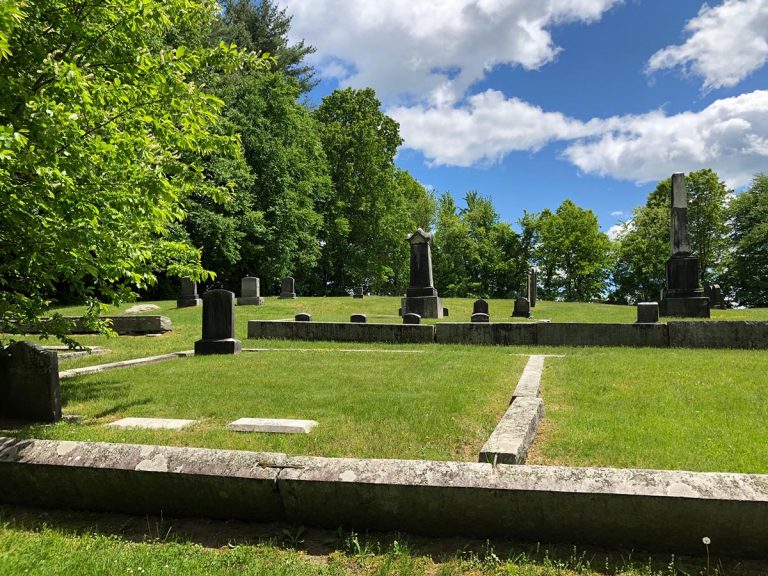 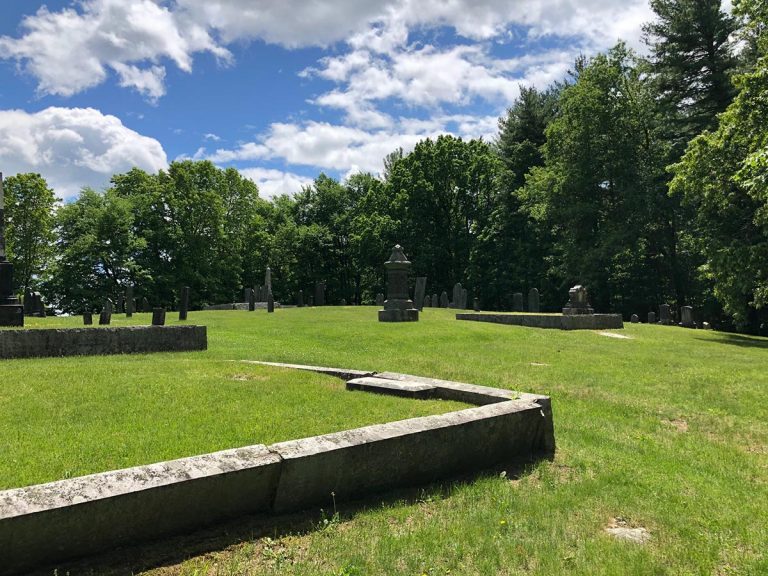 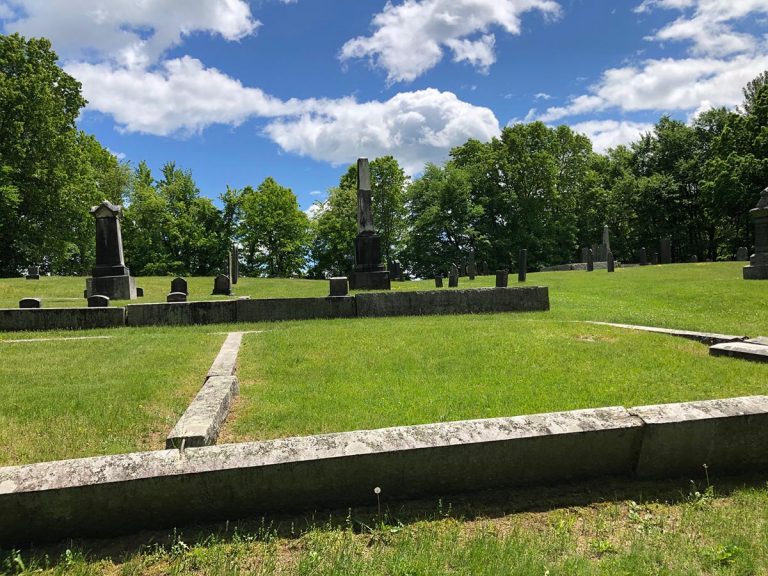 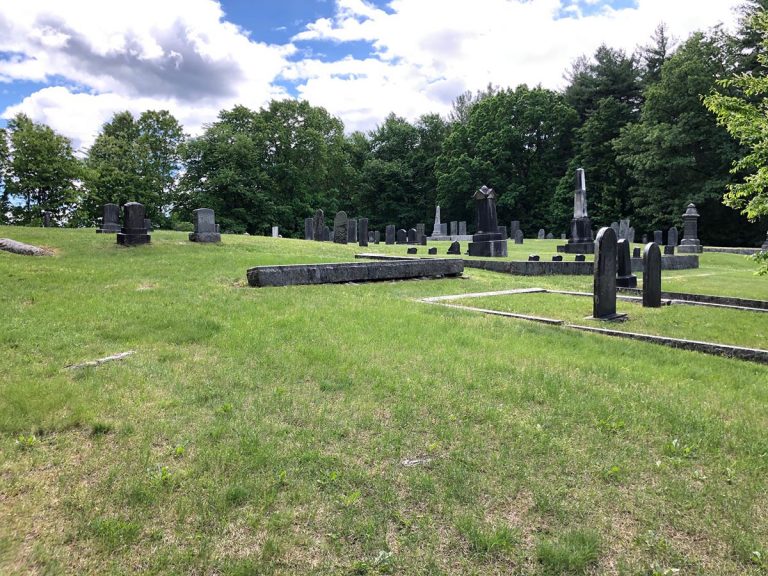 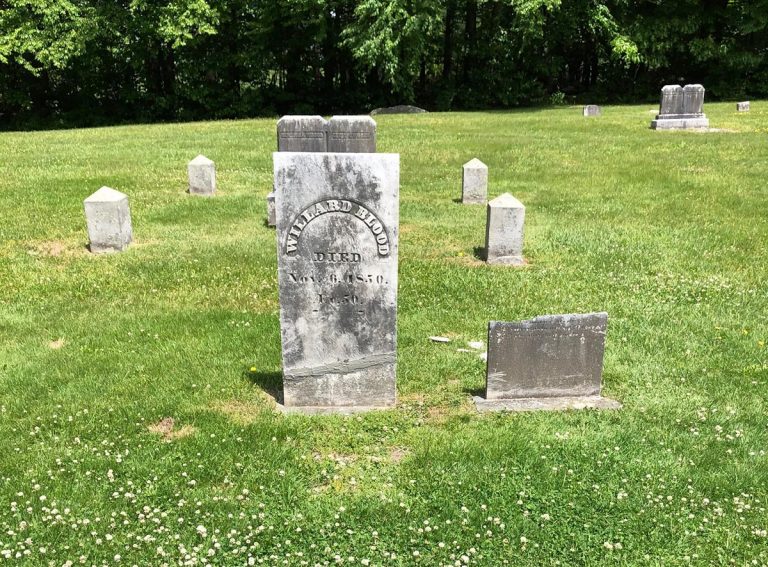 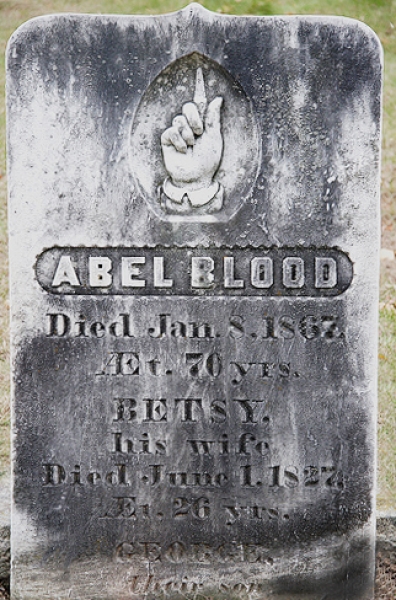 Blood Cemetery haunting rumors: In the 1970’s and 1980’s teenagers reported seeing Mary Blood in their rear view mirror when they slam on their brakes as they pass the cemetery. Today, the rumor is that the skid marks are because the spirit of a young child jumps out in front of you as you pass the cemetery. Both seem to be untrue from our experiences, so don’t bother the neighbors by skidding your tires there.

Blood Cemetery Investigation: I investigated Blood Cemetery before paranormal investigations were cool, before they were on TV, and before it was even socially acceptable to believe in such an oddity. My friend and I talked about going there many times but we always chickened out. But one cool evening in the Fall of 1990 we decided to do it. We stopped along the roadside and walked into the cemetery around dusk and began looking around. We were there for about 20 minutes without seeing much. It was quiet at the time, almost an eerie quiet but the longer we stayed the more comfortable we became being there. We heard some rustling in the nearby woods that didn’t amount to anything. We continued to walk around reading and admiring the craftsmanship of the headstones from an earlier time. As the sun was setting I looked around and saw an engraving of a hand on one of the gravestones that had a finger pointed upwards. I didn’t pay much attention to it at first, that is until I turned to look at my friend that was with me who wanted me to look in his direction. What he wanted me to look at seemed boring in comparison to what I was already looking at so I turned back to look at the stone with the engraved hand on it. When I looked back at the hand I noticed it was leaking some sort of brownish rust colored fluid that was not there just seconds earlier. It had puddled up on the bottom of the egg-shaped recessed area around the hand and began to drip down the face of the headstone. I have to admit I was scared, really scared! No, not the kind of scared that people are laughing and having a good time, this was nothing short of terrifying! Talking about it now seems almost silly to think of being scared but at that moment everything was telling me to leave. I was frozen in fear, unable to even speak… I didn’t even tell my friend I was leaving, I just ran out of the cemetery as fast as my legs could go. I leaped over the stone wall like an Olympian, across the street and yelled for him to come to the car. He also ran towards the car knowing I’m not usually freaked out easily and I’m not one to be overly dramatic. When he got to the car I explained what I saw. He then wanted to go see it for himself. He asked me to come with him, which I refused. I told him I would return at some point, just not then. He asked me where the stone was, he was going to see it for himself. I explained where the stone was and demanded he leave the keys to the car. He said I “looked sick” and asked if I was OK. “I feel fine” I said, but I wasn’t sure of much as my adrenaline was flowing. He walked away from the vehicle, crossed the road and went into the cemetery again. He walked up the hill where the stone was and right before I lost sight of him he arrived at the stone. He seemed to be in shock as he stared at the stone. All I could see was his silhouette in the fading light, just enough to realize he wasn’t moving. Right as I was becoming increasingly more concerned for his safety he suddenly bolted from the cemetery like a bullet running back towards the car. He tripped and fell on something and without a moment of pause jumped back onto his feet and ran back to the car. I asked him if he was OK after he fell, he told me someone or something pushed him. He said he felt a hard push on his left shoulder and felt it was very powerful and knocked him off his feet. We left the area and promised to never return. We stayed up all night discussing what had happened, his experience of the stone with the hand on it was exactly what I had seen and explained to him before he went in alone.

I later found out that the hand points down after sunset. I did not witness this as I was unaware that this happens or I would have hung around a bit longer (not!). The headstone with the hand on it became well-known in the paranormal community and was replaced with a new stone at the end of October 2007.

Blood Cemetery… I walked in a skeptic but left a believer.

Now, when my friend and I visit each other we always talk about that night. We don’t usually discuss it with other people because it was really one of those “you had to be there” experiences. So when we talk about it it is with great excitement and our conversation always ends with the ongoing joke…  “Hey, you wanna go back?” We laugh, and say “nope!” at the same time.