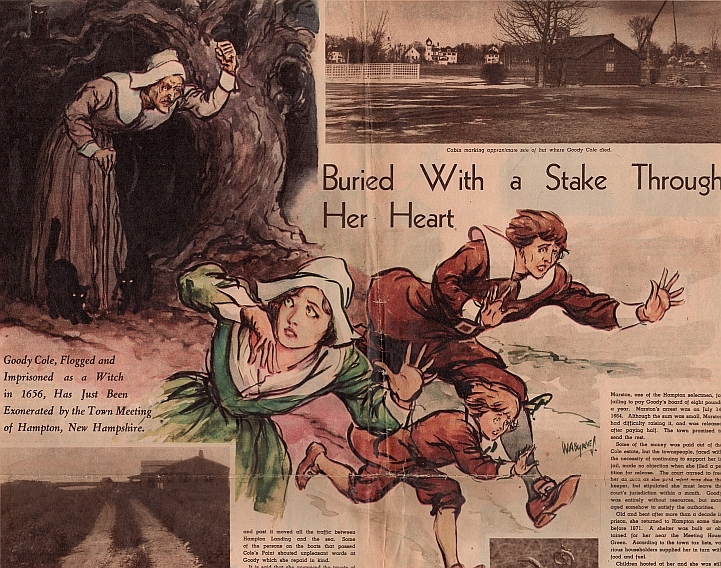 The Life and Death of Goody Cole

Goody Cole was New Hampshire’s only convicted witch. But her early life is a bit of as much as mystery as the years after her death. Goody Cole is not her real name but that is the name she went by. She may have been born Doughty or Doughtie. Her first name is thought to be Eunice. She is said to have been born somewhere around 1607 in England. There are no details about her early years. No one is really sure if there were no records that early in England or if her records were somehow destroyed.

Eunice Cole looked like what you would envision a typical witch to look like. She had the wrinkly face and crooked nose. But back in those days, women looked older quicker than they do today for a couple of reasons. One reason was that women worked a lot harder keeping house and the second reason is the lack of health and dental care during those times.

We do know that she married William Cole in England in 1625. William was born in 1582, making him 25 years older than Eunice. They sailed from England to Boston in 1637. They first made their home in Exeter NH and eventually moved to Hampton NH where they would settle down and Goody Cole would make a name for herself.

Goody Cole was not a likeable person by any means. She didn’t have any friends and her neighbors either hated her or feared her. She had a very unpleasant personality. Goody and her husband lived on Island Path in a very secluded spot.

Another incident happened when Goody Cole was on her porch when she noticed a boat going down the river with a family in it. The youngsters were chastising Goody by calling her a witch. She replied to them by saying “You are brave today, but I hear the little waves laugh and tell me that the broth that awaits you at home will be very, very cold.” Downstream, the boat encountered a sudden storm that caught them off guard. The winds blew at very high speeds for about 40 minutes and then all of a sudden the sun came out. The boat or the people on board, four men, two women and two children, were never seen alive again. Townsfolk suspected Goody Cole not only of being a witch but a dangerous witch at that.

In 1656, Goody Cole was charged with being a witch. Since no one really liked her, she didn’t have anyone to defend her and the select few that did believe she was innocent were afraid to come forward because they feared they would be labeled a witch as well. They were many who testified against her including a farmer whose calves died and two housewives who heard unexplained noises when they mentioned Goody by name.

Goody Cole was convicted of being a witch and was sentenced to life in prison or until the courts decided to release her. She was imprisoned with a lock kept on her leg.

There were many petitions by Goody and her husband for her release from prison. Her husband was in poor health and needed his wife to care for him but the courts denied their requests. William Cole died in 1662.

In 1665, Goody petitioned for her release and was granted permission on the condition that she moves out of the jurisdiction of the court. She moved to the foot of Rand’s Hill where the town provided a shack for her and food and heat as well.

In 1672, Goody was once again charged with being a witch. She was said to have been seen not only as a witch woman but as a dog, a cat and an eagle as well. But this time she was found not guilty.

No one is really sure when Goody Cole died because she had no friends and more than likely died in solitude. People in the town would start to notice that there was no smoke coming from her chimney in a few days so they decided to investigate and found their way into her home where she lie dead.

The village folks were still scared of Goody, even in death so they hurried to bury her in a hole outside her shack. She had a stake through her heart with a horseshoe nailed to the end of the stake. The stake was driven through her heart so she could not come back from the grave and the horseshoe represented warding off the devil from claiming his prey. The grave was also supposed to be covered up in such a way that it was not to be noticed to ward off future witches. But that night, she was unearthed by two of the towns’ wizards and the stake and horseshoe were removed. No one is sure where she was buried.

Goody Cole remained quiet for two hundred and twenty five years. The Fogg Family moved into a house that was built on the land where Goody’s house once stood. They stated they had encountered bad luck from the day they moved into the house.

But something amazing happened in 1936. A group was formed called “The society in Hampton for the apprehension of those falsely accusing Eunice Goody Cole of having had familiarity with the devil.” There were some famous people who were part of this group such as Governor Frances Parnell Murphy and Highway Commissioner Fred Everett.

In a town meeting held on 03/08/1938, the town cleared Goody’s name and restored her as citizen in good standing. They burned all the papers convicting her of witchcraft and placed the ashes in an urn. The ashes were supposed to be buried but they were forgotten about and the urn now sits in The Tuck Museum in Hampton.

Between the years of 1939 and 1963, the town of Hampton NH saw a mystery woman roaming around town. An old woman with blue eyes and grey hair would wander around town asking people where Goody’s memorial was. A police officer saw the old woman wandering around a cemetery reading the words on the stones. He asked her what she was doing and she stated she was walking around as she had been doing for hundreds of years. When he went to shine his flashlight on her, she was gone. Other townspeople claim they have seen the woman walk through closed doors.

No one has ever been able to prove who this mystery woman was.