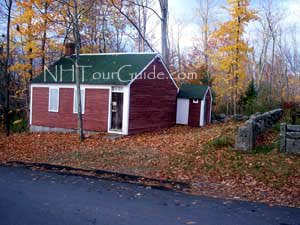 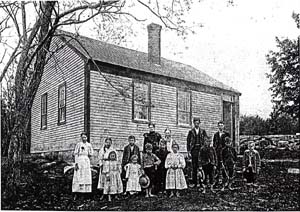 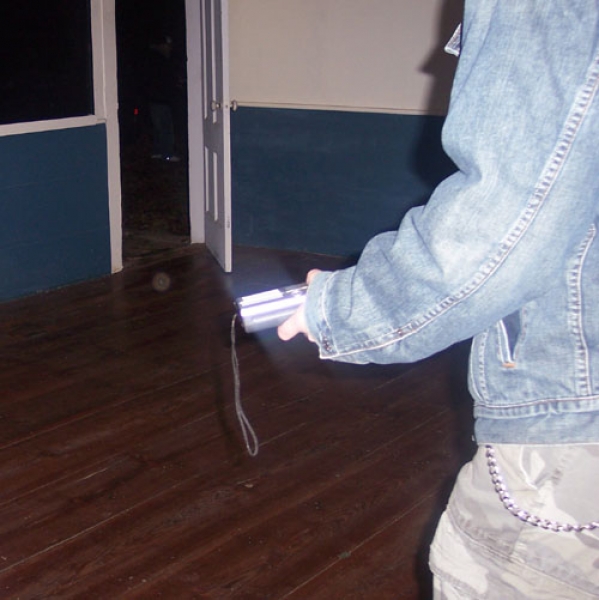 Orb floating through the doorway

Strange writing on chaulkboard ("HELO WHO ARE YOU?) - This was not visible to the naked eye, only appeared in the photo and looks to be scratched into the chaulkboard.

“There has been strange things going on at the little red schoolhouse in Epsom for quite some time.”

(excerpt from the first email we received about the property).

We often get calls and emails about haunted places in New Hampshire, but sometimes we look into the claim a little bit more. The little red one-room schoolhouse in Epsom was one of these times and it didn’t disappoint! In fact this was my own personal favorite experience since we started NH Tour Guide. I highly recommend reading this entire article. I have several hundred hours into the investigation, sifting through the evidence collected, research, communications and writing about the Little Red Schoolhouse haunting and history.

Here is the entire story…

I was sitting at my desk writing about a recent waterfall hike we did when I see an email come in from a user stating they were the caretakers of an old schoolhouse in Epsom and they believe it may be haunted. They have heard odd noises, been touched, and had things thrown at them in the single room schoolhouse when no one else was around. They made it quite clear they no longer enter this building alone and asked if we could do an investigation. We rounded up a team of paranormal investigators and met them at the location.

Upon arrival at the Epsom schoolhouse on this crisp fall day I must admit I was a little skeptical of what we were going to experience. I have had strange, unexplained events happen to me in the past that would convert the most hardened skeptic, but I still have a skeptical side to me that may never go away. I have also had many people tell me stories of things that had happened to them that I just couldn’t believe, and my hunch was proven correct. But like I said this was very different and changed my thinking ever since.

First, the paranormal investigators did an interview with the property manager and took notes on past events that have happened. Then, two mediums entered the school house at separate times in order to validate their findings. First one went in and returned a short time later to allow another medium to enter the schoolhouse independently before collaborating her experience with the other medium. While she was inside the schoolhouse the first medium that entered began to tell us that there were many spirits haunting the Epsom school house. She explained that there was a man (Benjamin) and a woman who’s name began with an “M” – she felt that they were married. She also explained that there were 12 children, 6 of which were kept after school everyday and abused, then killed in the Epsom NH schoolhouse because they were afraid the news of the abuse would get out. After a short time the second medium returned and explained almost the exact same story to everyone. Confirming each of the findings from both mediums. The information they obtained from inside the schoolhouse was also compared to some history and rumors found about the haunted school house.

With both medium’s explanations about what they believe took place at this schoolhouse, we entered the schoolhouse and temperature readings were taken, starting at approximately 42 degrees. As the crew began to ask questions of the spirits inside the school house, the temperature began to fluctuate from 42 to 60 degrees (almost 20 degrees in a matter of just seconds). The crew and myself began to take pictures, videos and sound recordings as well. As the investigation of the Epsom schoolhouse continued, a medium began asking Benjamin, the teacher, and the child spirits to change the temperature to different degrees, and they cooperated with an unusual accuracy.

After approximately 30 minutes inside the schoolhouse, it was obvious to the team that the spirits that haunt this Epsom, New Hampshire landmark were gone. When I left, I felt that I didn’t capture anything at all on my camera, video, or sound recorder. I left with little excitement to check my sound recordings for EVPs (Electronic Voice Phenomenon).

After reviewing the sound recordings that same night, I found that there were a few strange noises that I couldn’t explain and one of a woman’s voice which was a fairly clear, long statement. After reviewing this sound file well over 200 times, and seeing the photos I personally took, I find it hard to deny the Epsom schoolhouse hauntings. Yet without solid historic proof, the rumors cannot be validated.

If you have ear phones or a headset for your computer it makes the EVP recordings below a lot easier to hear and understand. It is always best to listen to the EVP recordings several times to get the best results. You may need to increase the volume to hear them better.

** Our interpretation of these EVP recordings are at the bottom of this article. **

History:
The history of the Epsom schoolhouse is very limited. All of the history I was able to find so far is contained in this section and updated quickly if new information is gathered. I contacted the Epsom Town Hall, who gave me contact information for a local Epsom, NH historian. The historian pointed out a few places to get information. One of them was the Epsom Town Library. I visited the Epsom Library and found that they have a small local NH history collection. I was able to find out that the school was opened in 1834, was separated from the New Rye School District in Epsom after a fire at the schoolhouse and made part of the Mountain School District. The school was closed in 1911. Ten years later, the school was sold to the Mountain School Club. The school was reopened for the 1926/1927 school year, then mysteriously closed and no further information is found about the school itself. I also did not find any history yet that mentions anything about the rumored school murders. I did find that the Epsom town officials had replaced a teacher at this little schoolhouse at one point, but with no explanation given. It appeared it was the teacher’s choice for leaving the district but that is an assumption on my part. I was also given a lot of information by someone I would consider a highly reputable source (and also a wealth of historic information about the town of Epsom NH). He told me that there is a “Benjamin Wiggin” buried at the cemetery next to the schoolhouse (during the investigation, the name Benjamin came up as well as his wife that I was told by the mediums there during the investigation begins with an “M.” The name “Benjamin was also heard on a recorded EVP below). This does NOT prove that Benjamin Wiggin or his wife were involved (only first names were heard during the investigation), Benjamin Wiggin died in 1844, his wife (Mary Dow) died in 1846. It is important to note that the first names could be a coincidence. The names Benjamin and Mary were very popular at the time and still are. There is also no proof linking Benjamin Wiggin or Mary Dow to anything at all and could possibly be a mere coincidence, I can’t stress this enough. As far as child deaths in Epsom NH: I began looking through the Epsom NH death records for multiple child deaths and found that the death records did not record cause of death in most cases during the 1700s and 1800s in Epsom. So instead of searching, I had to browse through the death records prior to 1844  and did find some multiple child deaths. The most interesting was in October 1834 (the same year the school opened) when 5 children died, the actual day of the month is not listed, but what makes this interesting is that of the 5 children: 2 of them were from one family, 2 from another family… 2 sets of siblings dying at the same time… coincidental? Possibly. I find it odd that 2 families would each lose 2 of their children at the same time and because the death records were written together on the same line entry (ie: “2 children of…. “), tells me that each of the 2 sets of children possibly died on the same day. There were also a few other child deaths around that same time. There does seem to be a lot of child deaths back then in the NH death records, none that I found list the cause of death. Again, not sure if this was a lack of medical knowledge or otherwise that contributed to these young deaths. Please note that no historic evidence found so far supports the validity of the rumor. The names mentioned in this report does not in any way mean the people were involved. Remember, there is no record of this event in the Epsom town records found so far. The ghost investigation evidence could possibly be the results of a different story. The evidence found during the investigation of the haunted schoolhouse tells me at the very least something happened.

Below is a book written by demonoligists that were at this investigation:

EVP Recordings (what we heard)

*Note: Unexplained versions of these EVPs are above.

While we were discussing the property managers who didn’t want to come inside for the investigation we caught this one. You will hear an investigator saying “Yup, or they could sit in the truck,” then you will hear a man’s voice say “No”

(I was the only male in the schoolhouse)

As we were leaving the haunted school house I left my recorder on for a short time so that everyone would be gone. You will hear footsteps (us walking out) then you will here what sounds like a woman saying “Can you move over behind her so you guys can see me, bi*ch”

The EVP below is suspected to be the teacher talking about her husband “Benjamin” who was found to be one of the spirits that remain in the old haunted schoolhouse by both of the mediums that attended this investigation. This is by far the strangest and most unexplained EVP I have ever heard. In the middle of the recording you will hear one of the investigators calling out a temperature. She was reading off temperatures as they were changing. She was the only one talking during that session.

“God no….  Help Benjamin, he made them do horrible things”

To get started with ghost hunting investigations, the kit below has everything you need.

Orb floating through the doorway

Strange writing on chaulkboard ("HELO WHO ARE YOU?) - This was not visible to the naked eye, only appeared in the photo and looks to be scratched into the chaulkboard.

2 Questions, Comments, and Reviews on “Little Red Schoolhouse in Epsom: The Paranormal Investigation”