New Hampshire State Seal: Whats on it and What Does it Mean? 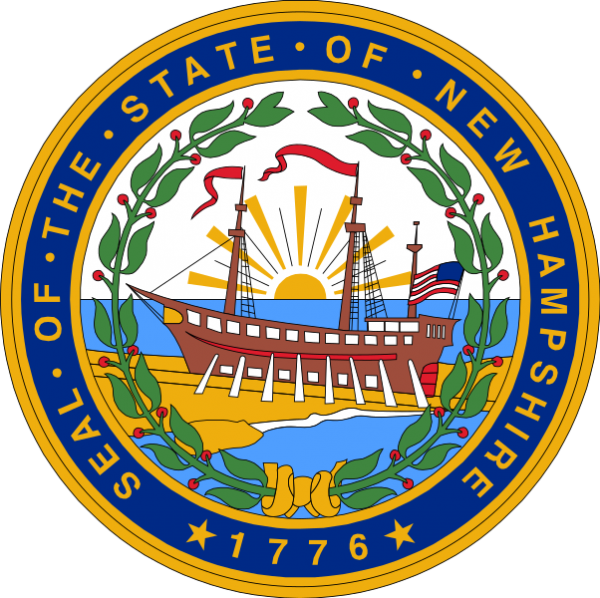 The NH State Seal’s main feature is the image of a warship, surrounded by a Laurel Wreath. The Laurel Wreath is a sign of victory and honor.

NH State Seal: Why Does it Have a Ship on it?

The NH State Seal shows a warship called the “USS Raleigh” which was built in 1776 in Portsmouth NH. It was one of the first thirteen warships built by the Continental Congress for a new American Navy. The warship shown on the NH State Seal has quite the interesting history…

The USS Raleigh’s keel was laid on March 21, 1776 at John Langdon’s shipyard, which is now called “Badger’s Island” in Kittery Maine. The frigate was built with 32 guns and a figurehead of Sir Walter Raleigh. The ship set sail on May 21, 1776 and was immediately put into service and began its fight engaging in many battles alongside the USS Alfred and capturing enemy ships. She sailed to France and the coast of Africa, making its way back to New England (Boston) in April 1778 after not being able to assist the Alfred in a battle with British Ships. The captain of the Raleigh (Captain Thomas) was suspended as captain, accused of cowardice and dereliction of Duty for not assisting the USS Alfred. Soon after John Barry was assigned as the captain of the USS Raleigh.

In September 1778, the Raleigh, with its new captain set sail in a convoy for Portsmouth, NH from Boston MA and encountered British ships 6 hours into the voyage. Captain Barry was ordered to return the ship to Boston to avoid a battle with the British. Along the way the British ships chased the USS Raleigh and the convoy North and eventually catching up with them which ignited a 7 hour battle. Captain Barry of the USS Raleigh headed towards Penobscot Bay Maine to hide the ship in between the islands but another battle ensued. While the Raleigh returned fire to the British ships, the captain ordered Raleigh to reach land and the ship grounded on Wooden Ball Island in Maine to continue the fight. The British remained engaged in the battle and then anchored nearby. Captain Barry ordered his crew off of the ship and to burn the Raleigh. The crew made it ashore as another ship was sent to get the crew of the Raleigh and ordered to burn the ship before the British could capture it. But before the ship reached the Wooden Ball Island the British once again began attacking the ship, striking the flag which ended the battle. A few of the Raleigh crew were captured by the British on Wooden Ball Island but most made it back to Boston. On September 28, 1778 at high tide the British re-floated the Raleigh, repaired the ship and commissioned the Raleigh to the Royal Navy, renaming the ship the HBMS Raliegh. The British was very fond of the design of the Raleigh and applied the same design to their ships.

USS Raleigh gets its name from Sir Walter Raleigh. The USS Raleigh proudly displayed Sir Raleigh’s image on it using a full sized figurehead. Sir Walter Raleigh was, for the most part a soldier, politician, writer and explorer. He was favored by Queen Elizabeth I and knighted in 1585. He was a leader in the English colonization of North America. He was granted a Royal Patent to explore Virginia for future English settlements. This is how Raleigh County Virginia got its name. Sir Walter Raleigh made two voyages to find the “City of Gold” in South America in 1594 and again in 1616. He was arrested and executed in Spain because his men ransacked a Spanish Outpost during the 1616 voyage to the City of Gold. This action violated his pardon and peace treaty with Spain. Sir Walter Raleigh was one of the most notable people of the Queen Elizabeth era and featured as one of the 100 greatest Britons of all time in 2002 by the BBC.