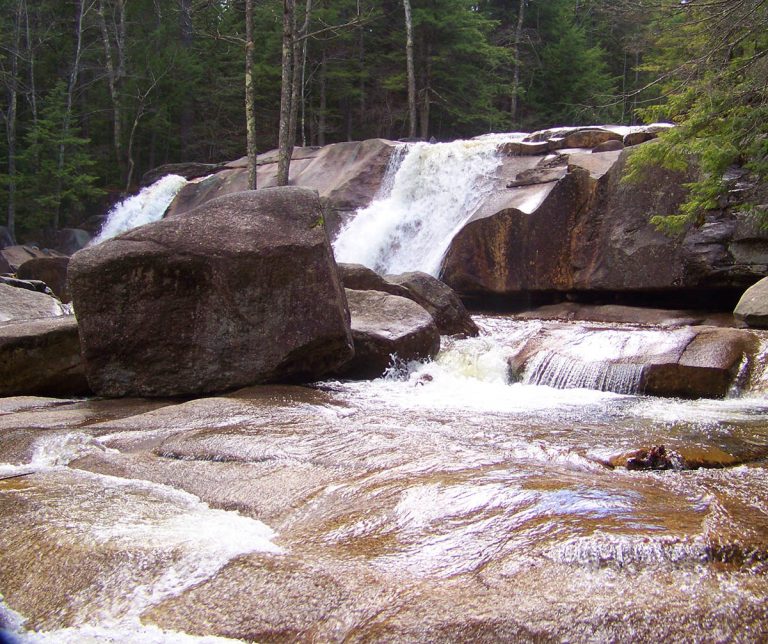 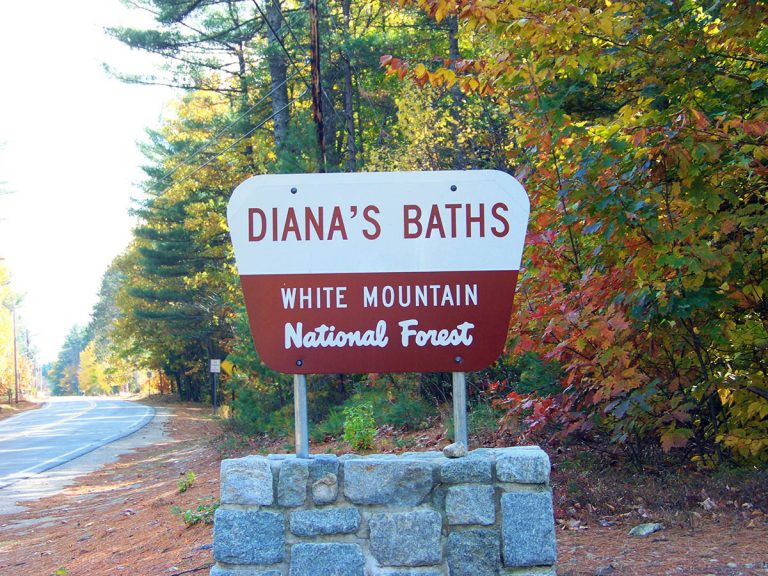 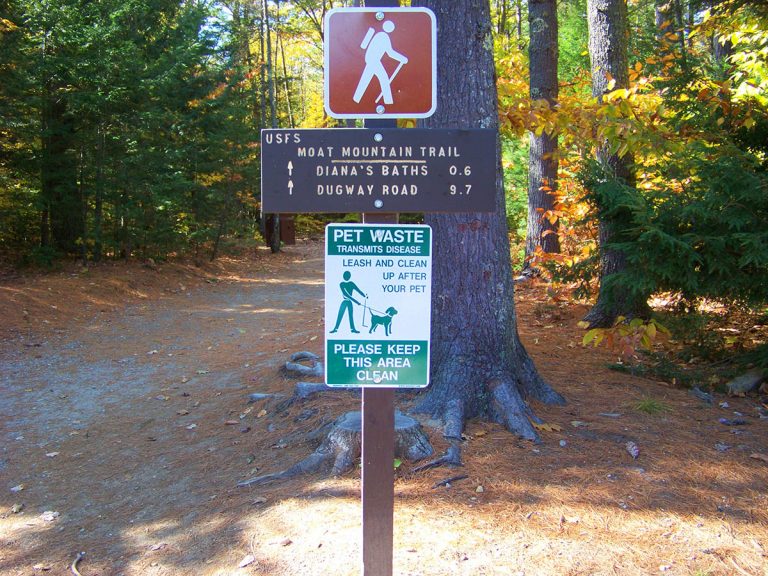 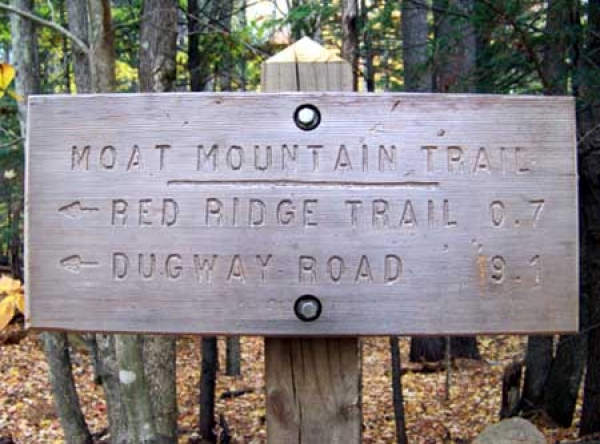 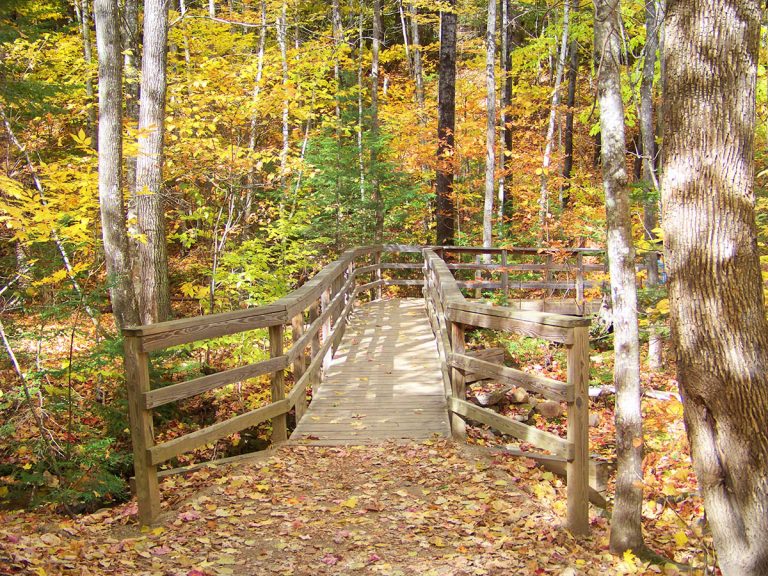 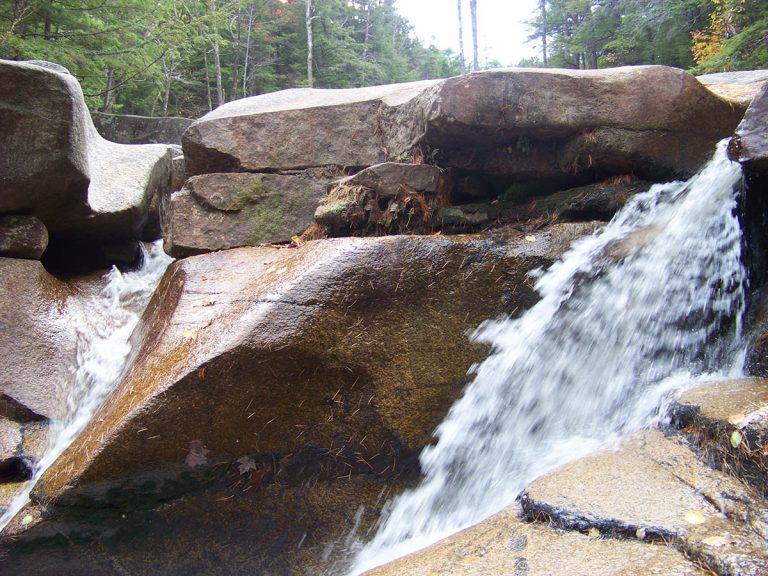 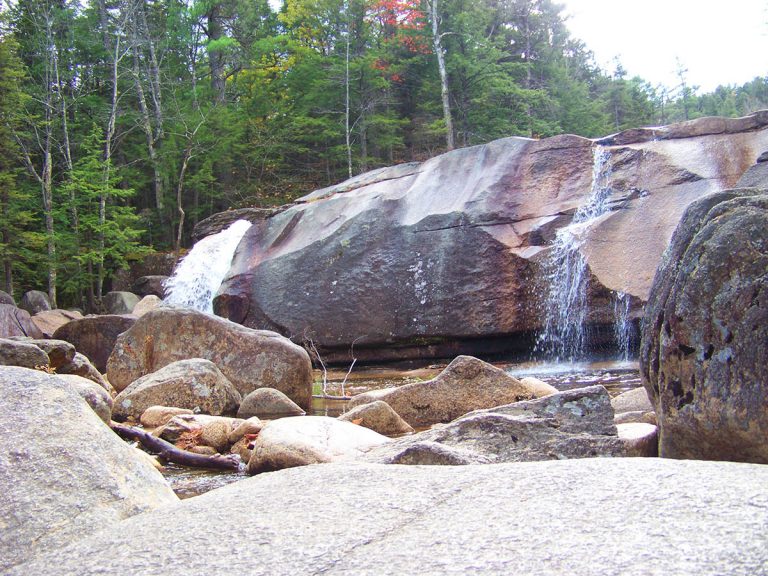 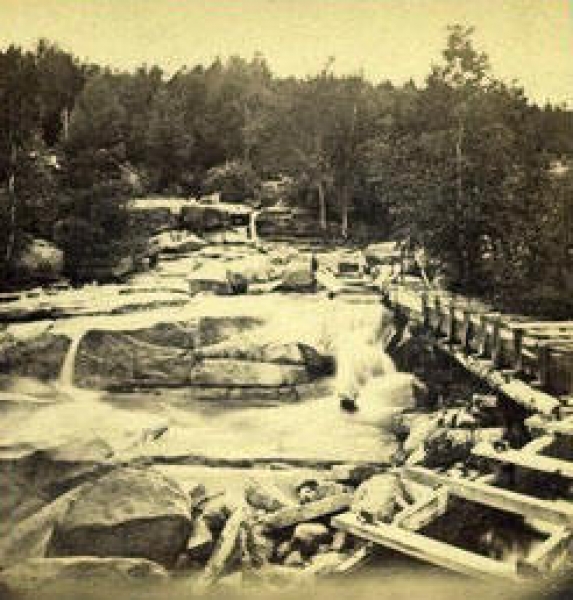 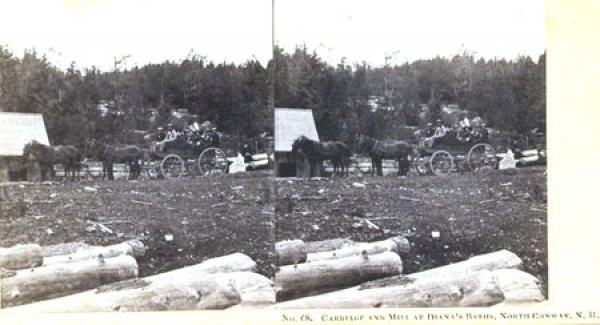 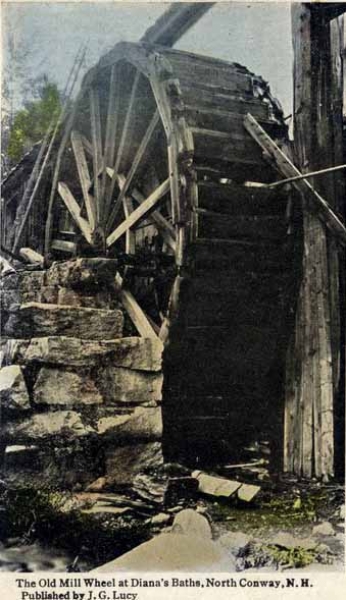 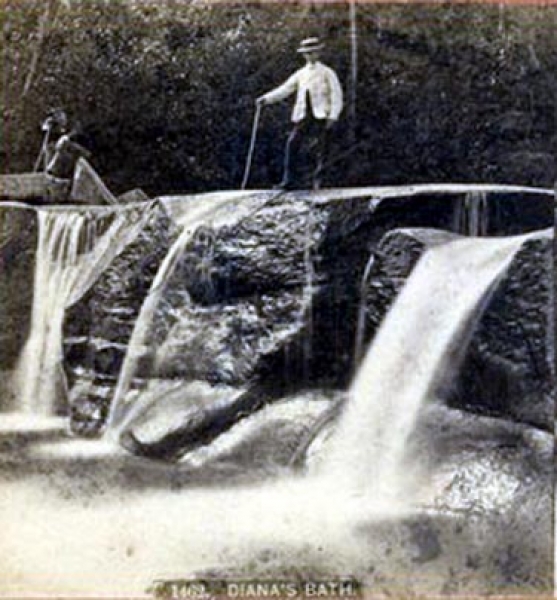 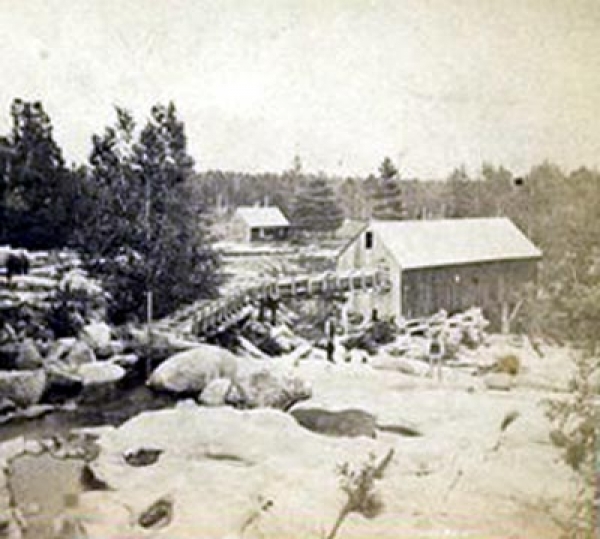 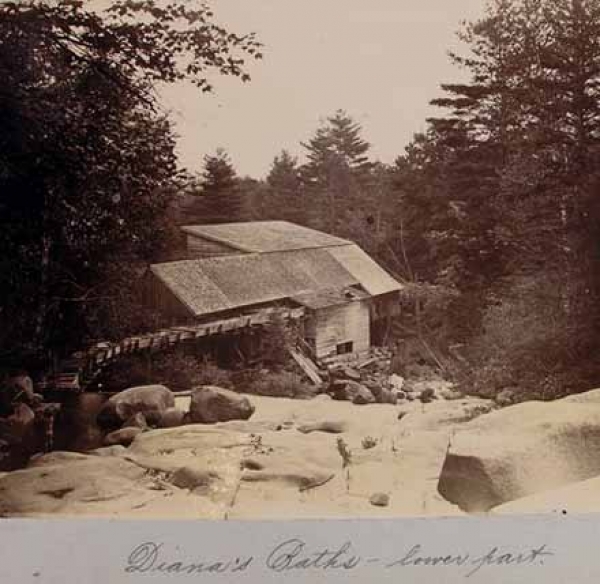 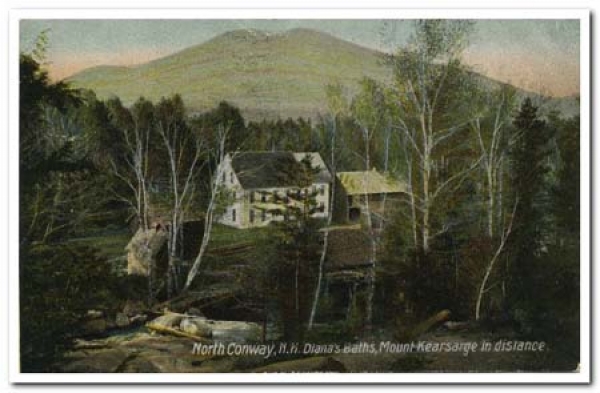 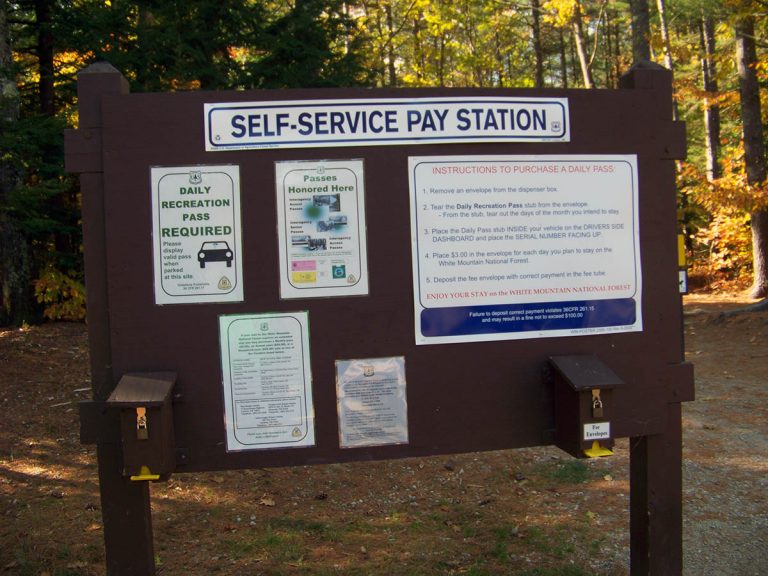 Diana’s Baths offers a well marked and well maintained trail to the waterfall. The 1/2 mile long trail is an easy hike for all ages. Leashed pets are welcomed but be sure to bring a bag in case you dog makes a mess. Once you arrive at Diana’s Baths, be sure to look towards the end of the falls on the trail side and you will see the remains of the old sawmill. Be careful with kids as there is a hidden 10′ drop into the area where the water wheel was located.

A little bit further up, you will notice there are a couple picnic tables next to the pools at Diana’s baths. Upstream on Lucy Brook from the picnic area are cascades which are great for taking photos of this NH waterfall. The trail continues past Diana’s Baths but becomes a lot less easy as the trail heads towards Moat Mountain.

Diana’s Baths is fed by Lucy Brook in Bartlett, NH which originates near the summit of Big Attitash Mountain. The water levels vary greatly at Diana’s Baths. After heavy rains the waterfalls change dramatically. In the photos of Diana’s Baths below you will notice the water flow was light during our visit. We were able to walk across the slippery rocks to get close to the trickling waterfalls. Along the edges you will see evidence that the water levels get much higher and the waterfall flow can be much more aggressive and dangerous, usually in the Spring during the time of snow melt. The snow melts on the nearby White Mountains and runs into nearby streams and rivers, like Lucy Brook and passes through Diana’s Baths.

Outdoor NH Weddings:
Diana’s Baths may also be a good place for a wedding if you wanted to have your wedding near a waterfall. The ease and short distance of the trail leading to Diana’s Baths make this a waterfall you could consider for an outdoor wedding or any event. Contact The Saco Ranger Station for a permit.

An interview with Carrie Gleason says that “Historically, the Lucy family operated a sawmill at the falls and had a residence there. G.G. Lucy is the name sited on the 1892 map. His widow lived on the site until her death in the 1940’s, after which the house was vandalized and burned.”

But, in another interview with Chester Lucy on 12/5/92, Chester stated the the house and other vacant buildings on the property were a liability to the US Forest Service when they purchased the property and were dismantled by a local builder named Stuart Robertson, Jr. in the mid to late 1960’s. He salvaged the framework and may have used the materials to build his own house.

In 1863, George Lucy purchased 5 acres of land at the Diana’s Baths site. Prior to this, George had been a confectioner in North Conway opposite from the railroad station but had to find a move as the dust from the road was bothering his asthma. So he built a small house and a barn at Diana’s Baths and moved there (cellar hole still remains approx 200 yards east of the present mill clearing on the north side of the Baths trail). George then built a sawmill on the Lucy Brook. The mill was powered by an “undershot wheel.” The dust from the sawmill proved to be just as irritating to George’s asthma.

Around 1890, Diana’s Baths began attracting tourists, so George built a 3-story boarding house and a barn opposite of the dam. The house had 12 rooms and a shed chamber for the kids to sleep in during the Summer months. Unfortunately, there were 5 big hotels within a square mile in Intervale, NH. These hotels provided 6 and 8 horse carriages and gave tours that visited Pitman’s Arch, Diana’s Baths where they had a picnic, and then on to Echo Lake, North Conway and back to Intervale. The tours took about 4-5 hours.

Around 1910, George’s son John added a small souvenir shop at the Diana’s Baths site. John sold Balsam Pillows and Spruce Gum to the tourists. In the early 1930’s, John had ice cream delivered to the store from town as there was no electricity at Diana’s Baths.

Chester Lucy said his parents operated a small farm in the valley and ran their own boarding house in the summer. Chester’s father purchased the old saw mill at the base of the Baths. He fixed up the mill and added overhanging rakes and returns to give it a finished look. He then built the concrete dam and penstock pipe in the ledge upstream from the mill and installed a turbine to replace the old water wheel. After 5 or 6 years operating the mill, he he abandoned it for a portable mill that he transported to the timber sites he was harvesting.

The tourists business kept building through the 1930’s. The access road eventually became a town road The boarding house was also eventually sold in the late 1950’s to Mr. DeSimone, who was a local a druggist. Mr. DeSimone wanted to install electric power at the property and live there but the National Forest officials didn’t like the idea as the power would need to come over the national forest land. After 6 or 7 years Mr. DeSimone sold the land to the government and it became part of the surrounding National Forest.

In the 1960’s the abandoned buildings became a squatting place for the “hippies.” who used the railings in the boarding house for firewood and robbed items from the property like old sleighs, wagons and lanterns.

Eventually, the sawmill was also sold to the government by Robert Lucy (Chester Lucy’s brother). The vacant buildings on the property were a liability to the US Forest Service when they purchased the property and were dismantled by a local builder named Stuart Robertson, Jr. in the mid to late 1960’s. He salvaged the framework and may have used the materials to build his own house.

(Historical Photos of Diana’s Baths are below)

How Did Diana’s Baths Get It’s Name?

According to “Conway, New Hampshire 1765 -1997” by Hounsell and Horne, Diana’s Baths was earlier called Merrill’s Mills. There seems to be no record of why it became Diana’s Baths. There was a small house constructed there in the mid to late 18th (sic) century which was later expanded to a three story structure.

In an interview with Carrie Gleason in November 1987 (source: Conway Public Library), it states that when the property was taken over by the White Mountain National Forest, the name was changed to “Diana’s Baths.”

“These curious circular stone cavities on Lucy Brook originally were known as the Home of the Water Fairies; tradition says evil water sprites inhabited the ledges, tormenting the Sokokis Indians until a mountain god answered the Indians’ prayers and swept the sprites away in a flood. But sometime before 1859 a Miss Hubbard of Boston, a guest at the old Mount Washington House in North Conway, rechristened them Diana’s Baths, presumably to evoke images of the Roman nature goddess. The pools are also called Lucy’s Baths.”

There are no citations for the statement that Miss Hubbard re-named the cavities, and there is certainly more to this story, possibly recorded in local newspapers of the period. But the renaming was clearly part of the strong impetus, beginning with the Willey Landslide in 1826 and accelerating in the 1850s, to elaborate upon the romance of the White Mountains and to add to their evocative mythology as the region became more and more a destination for tourists.

From Eastman’s White Mountain Guide from 1867:

“The overhanging trees throw a pleasant shade around, inviting one to agreeable report. Above this, and indeed in many places below, are great numbers of holes or basins in rock, smoothly polished by the action of the water. It is from these, or perhaps from the largest, which is not less than ten feet deep, that the place derives its name. As you look into the limpid water with which they are filled, sparkling like crystals in the sun, or calm and quiet under the shadow of some overhanging tree, so that you may almost see the water sprites floating in the depths, you will readily acknowledge it to be such a bath as the goddess would have chosen for herself. An hour or two may be very agreeably spent in exploring the hidden beauties which are disclosed only to the observing eye.”

There really is no solid evidence as to how Diana’s Baths got it’s name. But it appears that there are many different opinions on how Diana’s Baths was named as well as the past history there. We have verified the name was used since the 1860’s.

The mysterious poem below also gives a little insight as to how Diana’s Baths may have gotten it’s name.

Through seas of mist toward Heaven’s changeless blue,

A crystal torrent born of shower and dew

Her midnight plunge, unseen of men’s wide view:
As chaste, as wanton still, as when she drew

Her bow in Latmos woods, by Ida lakes.

In the dim light of stars, when no moon beams,
Here, who has aught of poet’s sight may see,
Stretched on the torrent bank, seamed, glacier-worn,

Half walking and half lost in pensive dreams,

The shade of young Endymion, pale and lorn.